I arrived at the Puck Building at 10, but the place wasn't open for visitor till 11. So I spent over an hour under a very unexpected heat wave!

Guess who was the very first person I saw when I got in? 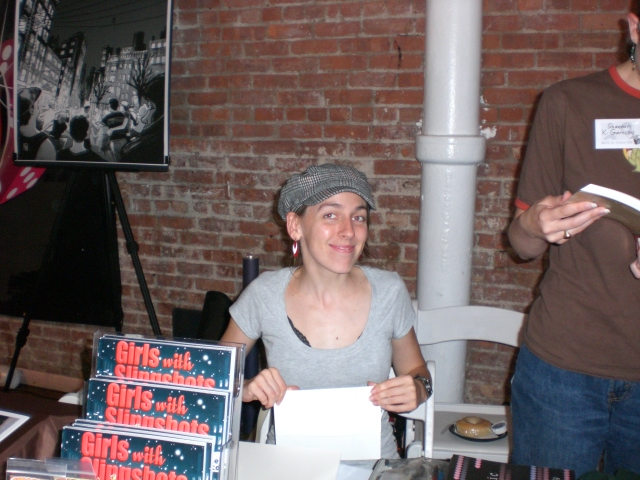 It's Danielle Corsetto of Girls with Slingshots! YAY!  X3

And who's that gal next to her? 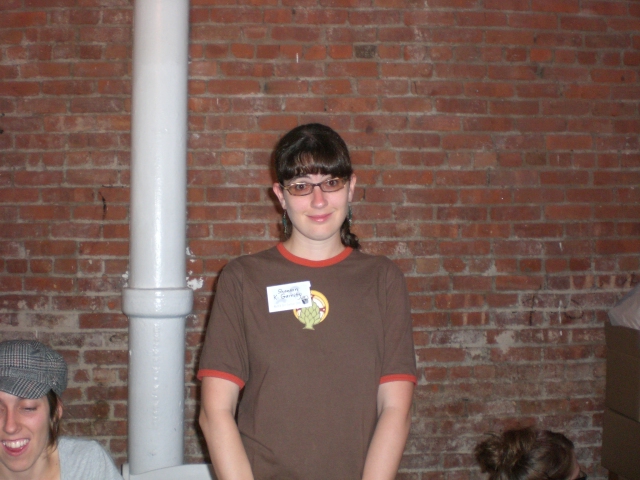 None other than Shaenon Garrity (

shaenon) of Narbonic and Skin Horse! 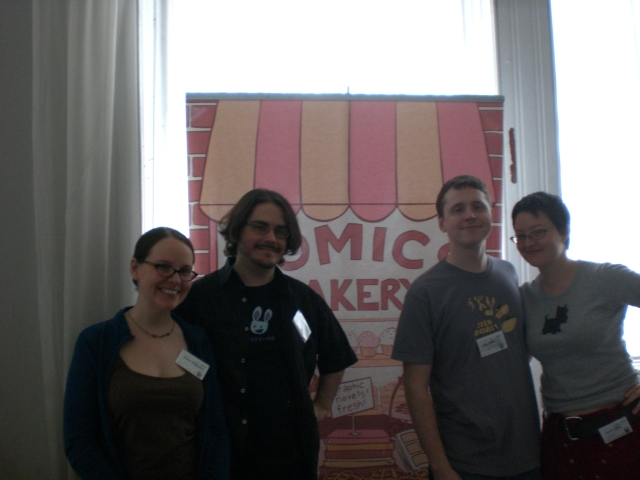 And then I finally got to meet the whole Comics Bakery crew!  (Dave

I then went to the webcomic area and met... 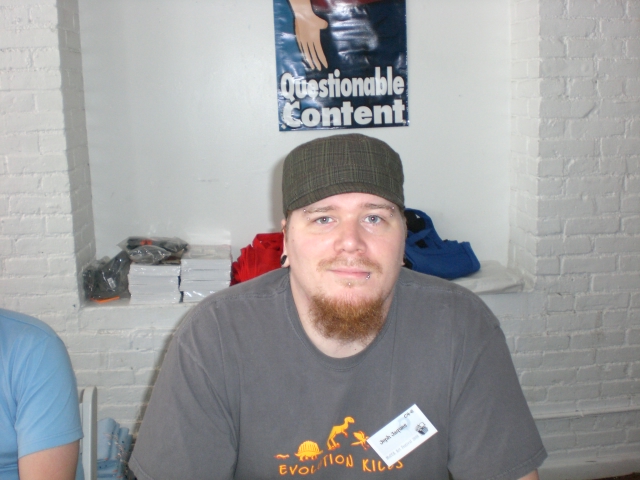 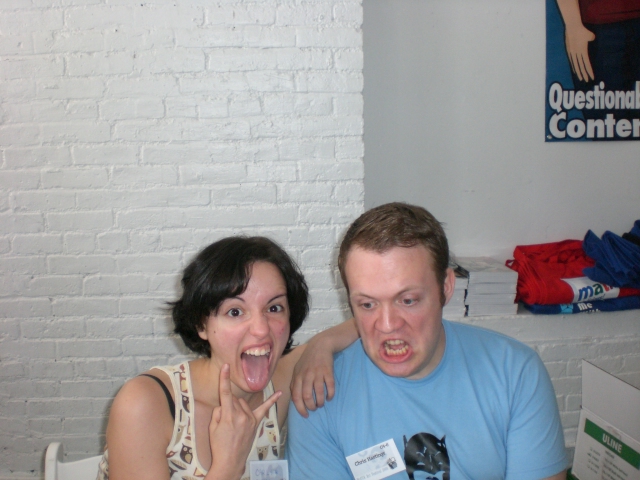 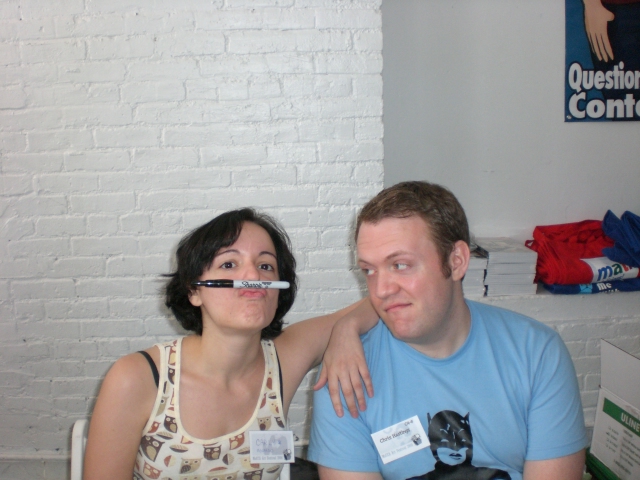 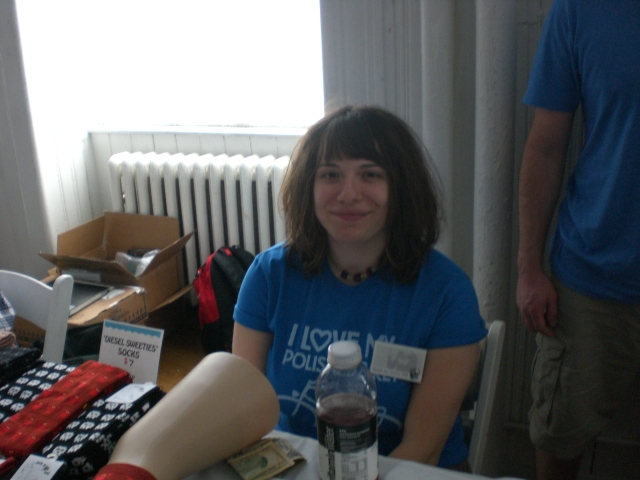 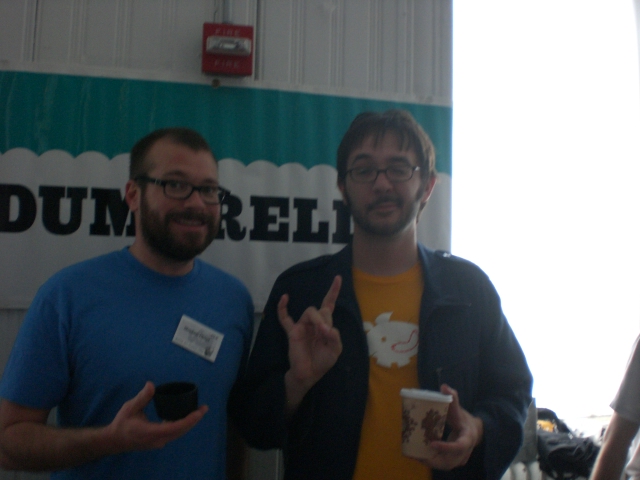 And I finally got to meet Richard Stevens (

rstevens) of Diesel Sweeties! We fist bumped! YAY!  Also in the photo is  Steven L. Cloud of BOASAS 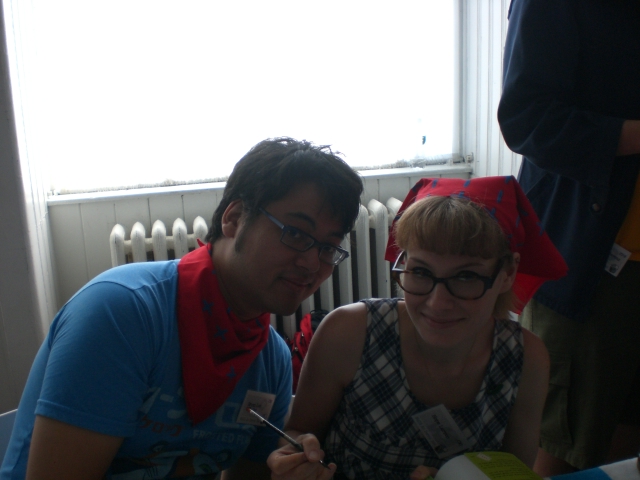 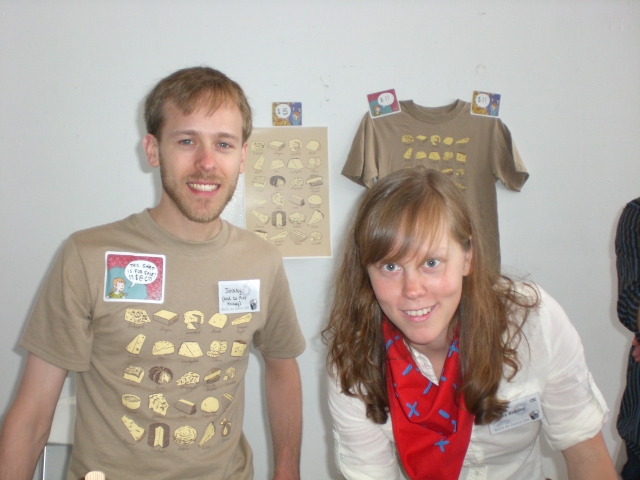 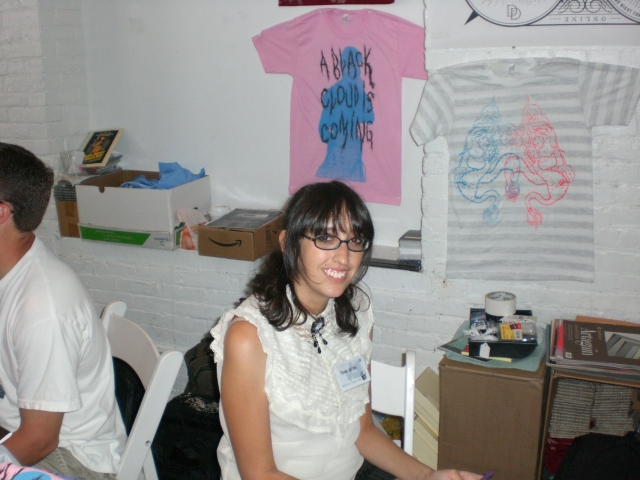 I finally got to meet Tania del Rio(

taniadelrio)! She does Sabrina the Teenage Witch and My Poorly Drawn Life! 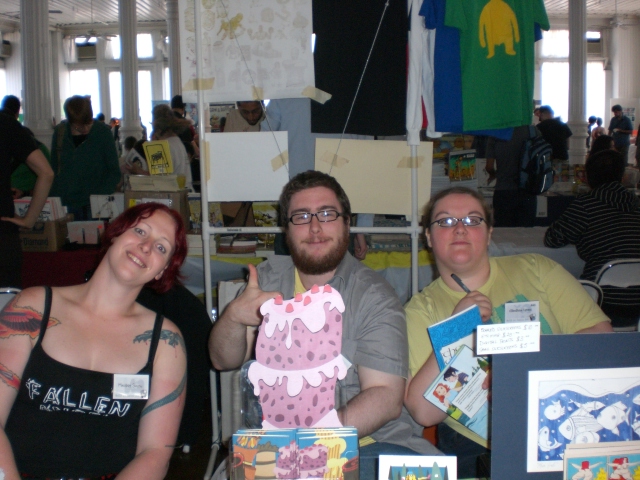 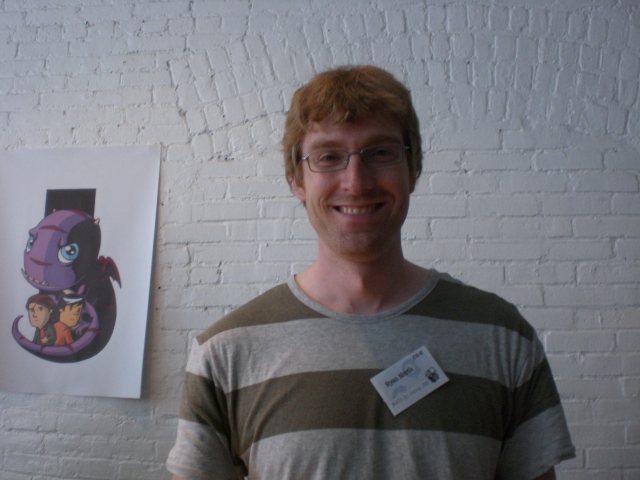 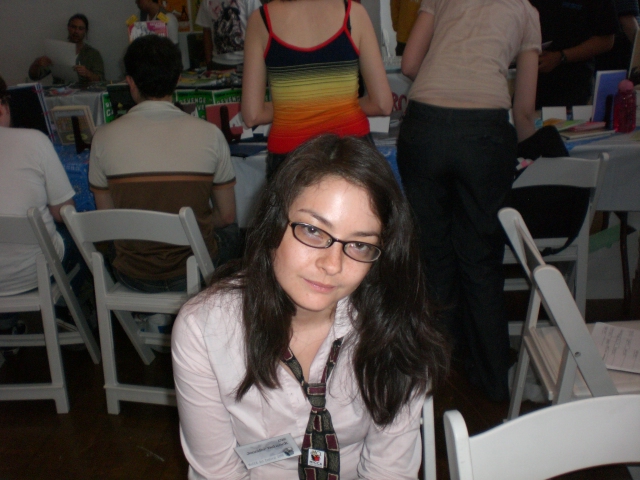 I finally got to meet Jen Babcock of C'est la Vie! 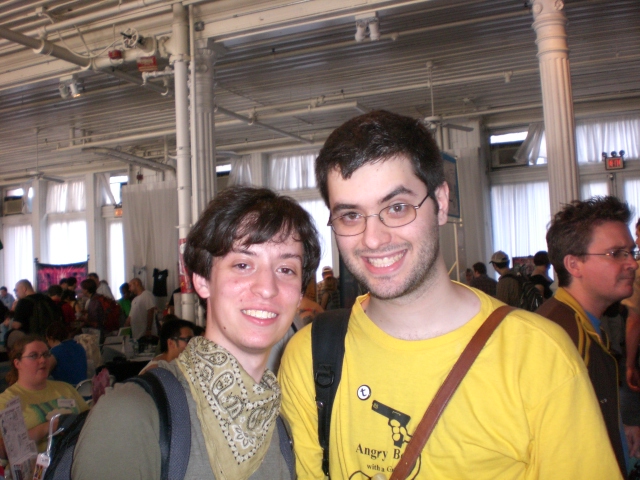 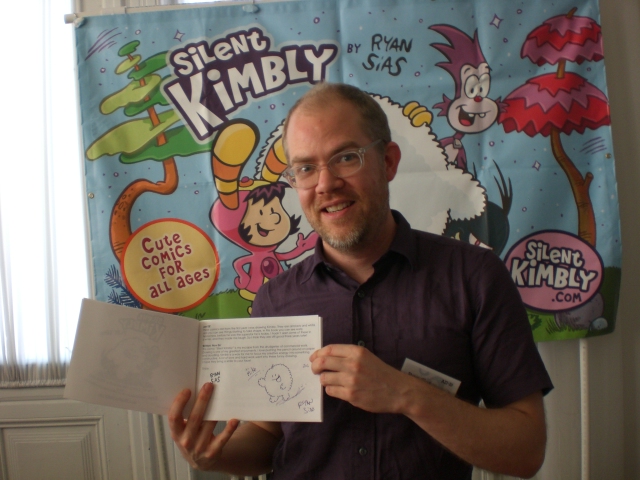 And I finally met Ryan Sias the super punster!

At this time I went to the 7th floor to see the rest of the show and met Spike of Templar Arizona... She was super amazing and she actually likes my stuff! SQUEE!

But I guess I forgot to check if the photo came out because I don't have any photos of her.... T_T 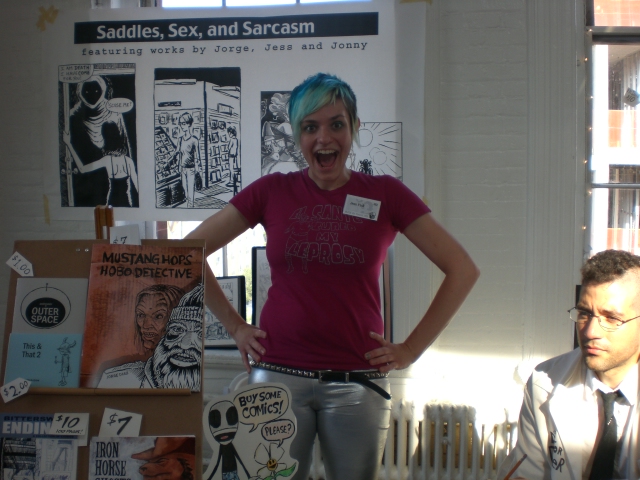 finkenstein) pants are made out of pure awesome and cure cancer! So do her comics! X3
The toy Chesters she sold lacked dingledongers! D:

I then called it a day and went to see Kung Fu Panda, which was awesome!

I went back to say goodbye to everybody and ended up spending most of the day there! XP

I also got tons of compliments on this super awesome T-shirt! 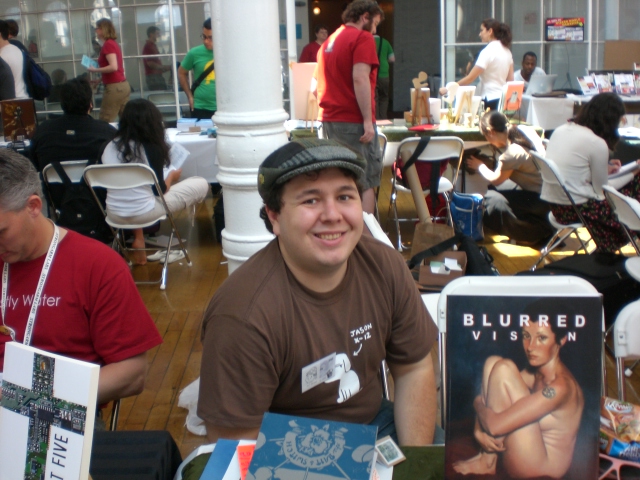 
Ryan Sias actually asked me sit down with him and talk! He was super nice and he was kinda curious about knowing more about me... ^_^; 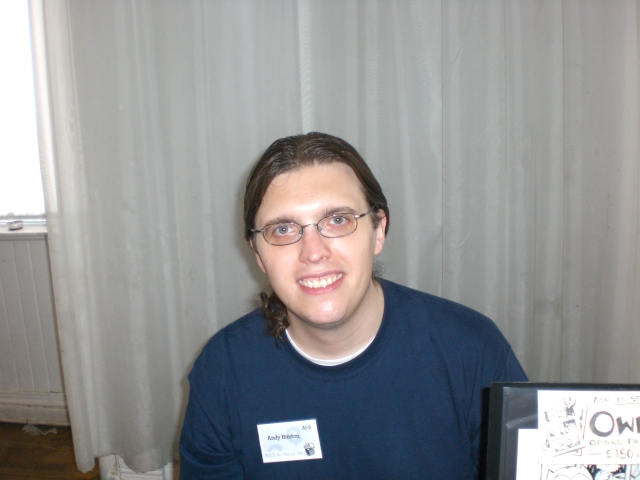 I then finally saw that Andy Runton was free and I could finally meet him too!  For some reason I expected him to be older....


I finally said goodbye to everyone and set off to go to the actual Museum of MoCCA!

It was an EPIC FAILURE! DX

I had TWO maps and directions telling me how to get there, I'm pretty sure I was on the right street, but I just couldn't find the building it was at! After an hour I went back to ask for "directions even a retarded 3 year old could get" and found this... 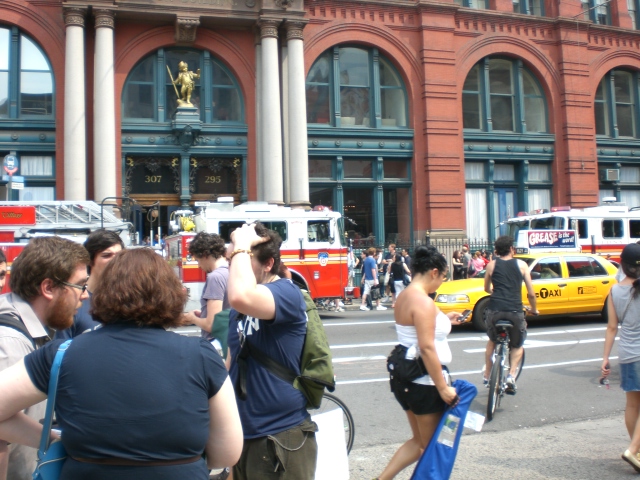 From what I've heard a boiler nearly blew up, which is why they evacuated the building...

This is the only moment I got to meet

sally_bloodbath, (you can see her back in the photo). After finding out that it was nothing serious and everybody was O.K. I asked one final time where on Earth was this fabled museum of cartoon art... Apparently I was in the right street all the time.... AND I STILL COULDN'T FIND IT! I don't know what is sadder, the fact I couldn't find it, or the fact that nobody on that section of Broadway knew that MoCCA even existed....

My brain was giving me signals and trying to tell me that I was sweating like a pig, possibly dehydrated and sound get back to the hotel ASAP. I could blame the heat affecting my brain as the reason why I couldn't find the damn place, but after 90 minutes under a unforgiving sun I just HAD to give up... Even if I did find it it was getting close to closing time... probably?

So I headed back to the hotel, went to Jamba Juice, found out everything was closing early due to the parade and simply stayed in my hotel room the rest of the day....

Since my cellphone didn't work I never got to meet


My overall impressions? It was awesome apocalypse of epic proportions! Sure it would have been even more awesome if Kochalka and Liz Greenfield were there, but it was a very awesome show I'd love to go to again!

My only complaint is the fact that they never told us the show opened at 11 instead of 10... 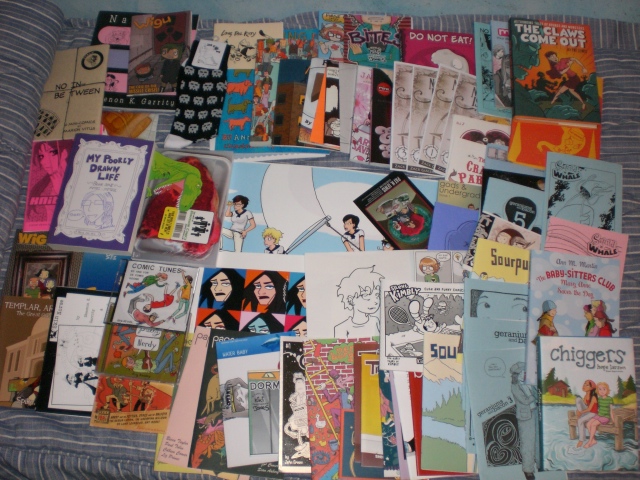 Here's my horde of comics.... I'll probably talk about my favorites when I finally get to read them all! XP 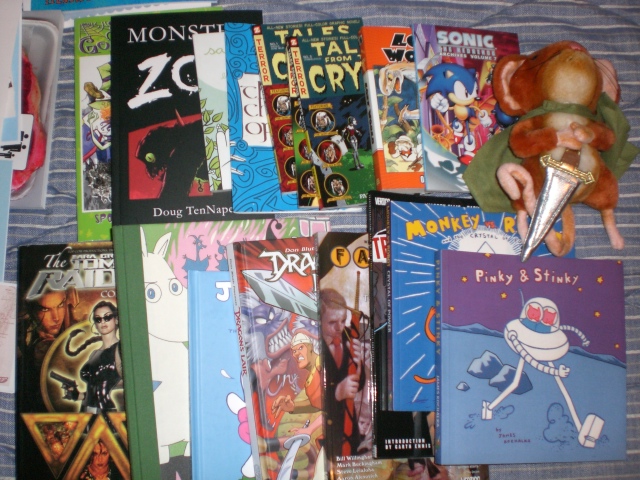 I also bought a few things at Jim Hanley's...