My ears are still feeling funny from the flight..... :P

I didn't manage to do a single thing the day before. Even though the plane landed at 14:00 and I didn't get  lost, by the time I arrived at the hotel everything was closed... So... I ate sammiches.... For every meal!

Even the walk to the con was AWESOME! I wasn't sure which way to go, but I saw a group with a bag full or comics... They were from Lulu UK and there were very nice people! We talked about indie comics, and they were very surprised that I recognized almost every webcomic on their free sampler!

I was first visited 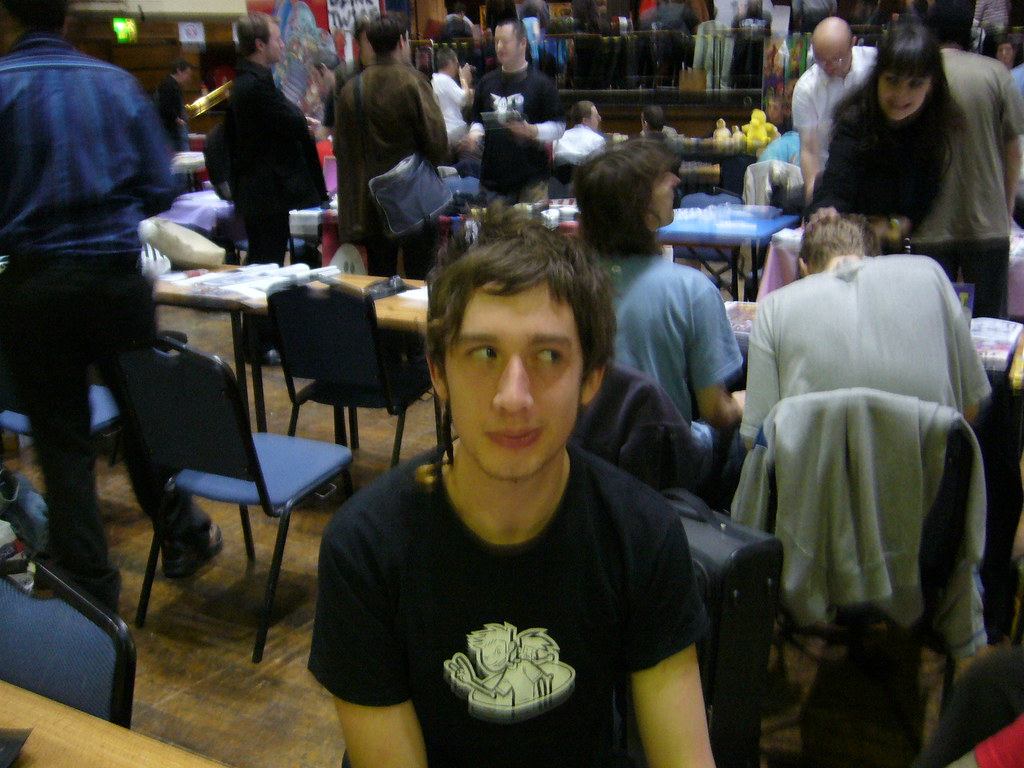 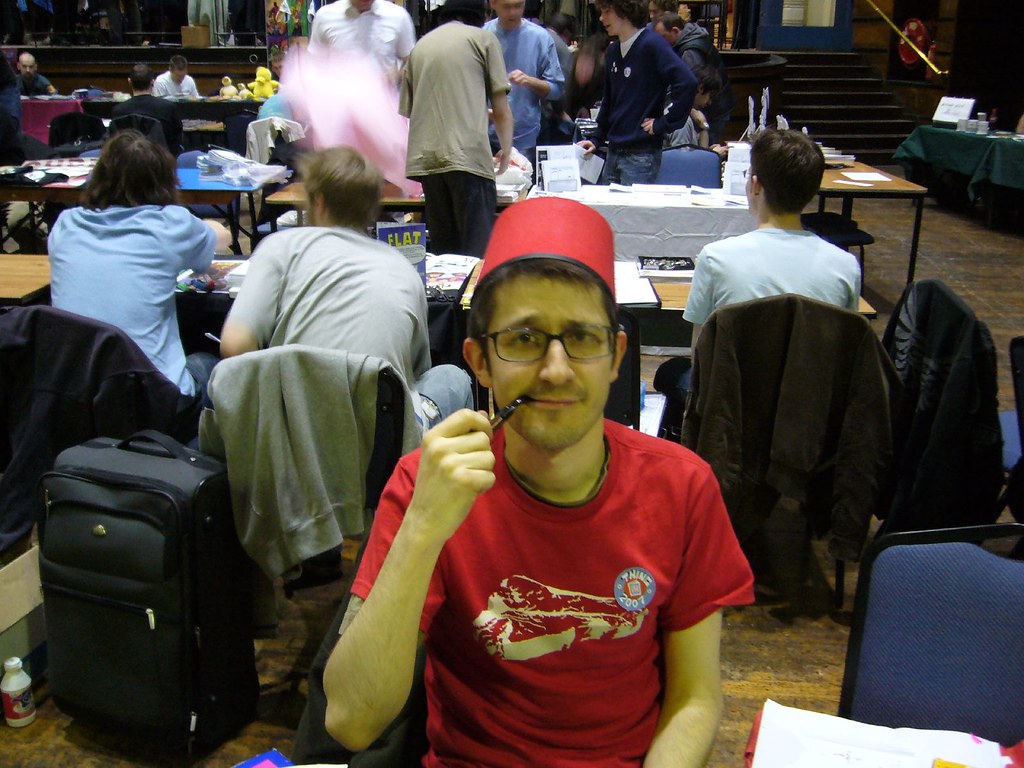 DO NOT PUNCH THE PANDA! XD 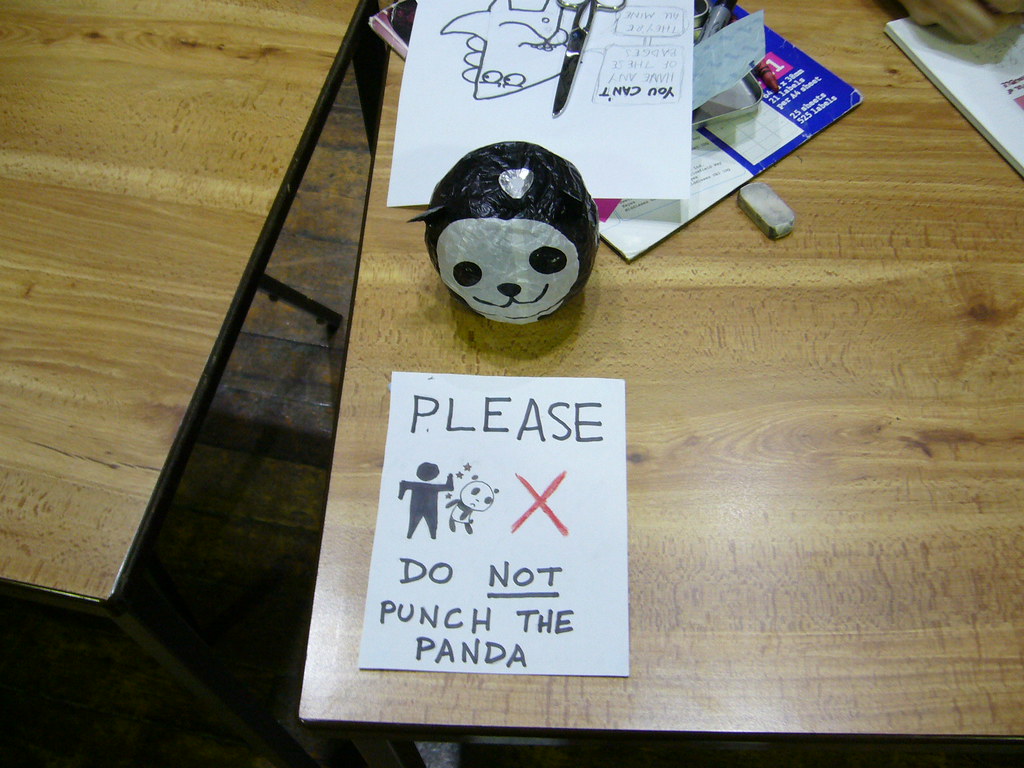 yaytime
were the cutest couple at the con! 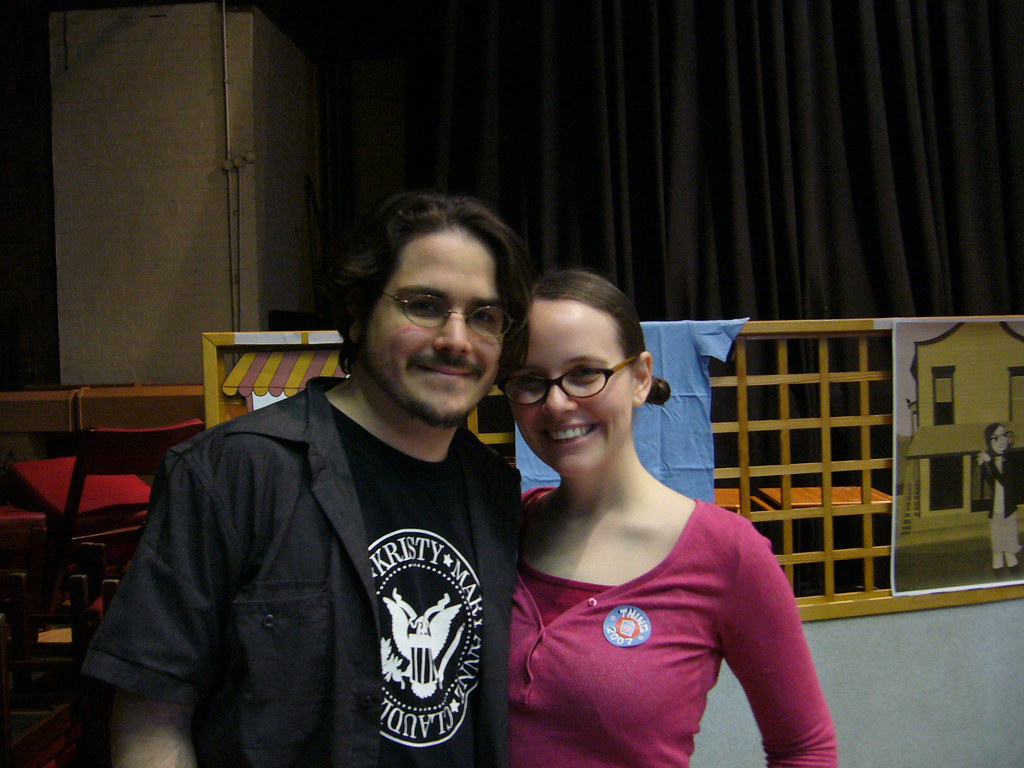 There ARE SOOOOO COOL! We talked quite a while and they even knew my name and all! XD
I could either rant for hours... or maybe just several minutes about how awesome and talented they are, but I'll just tell you to go to their sites and buy their comics.... NOW! Oh...They had a Ron Weasly Doujinshi, which was hilarious!


They were next to... John Allison! COR! 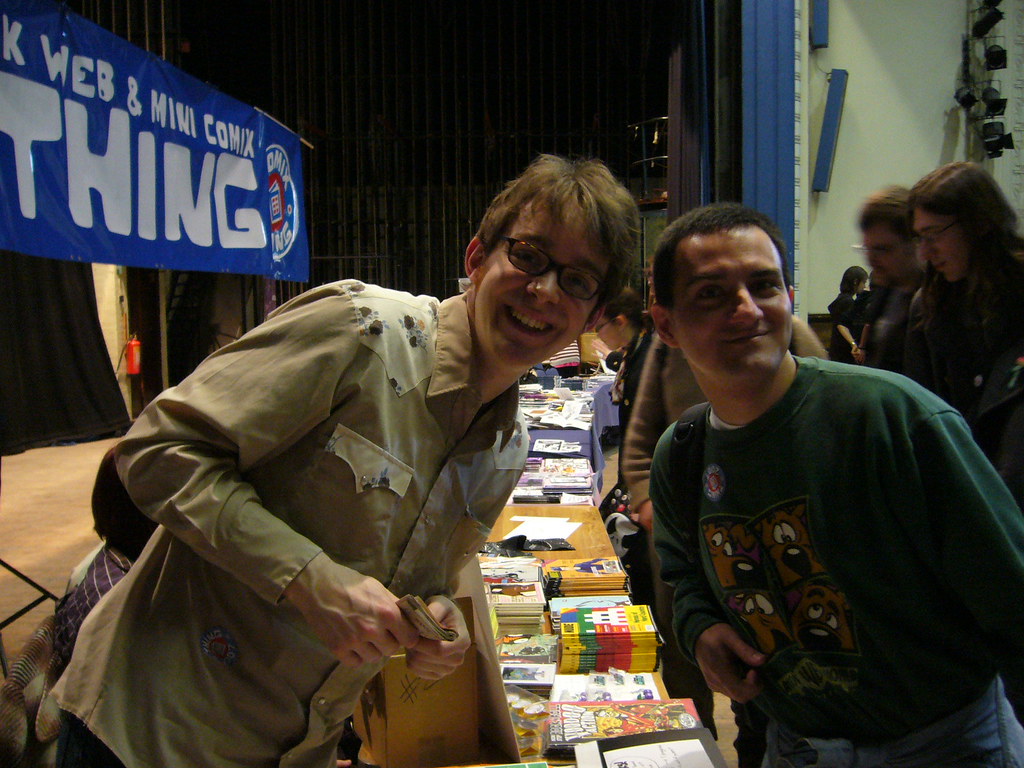 I got kinda nervous, specially because of the line that was behind me... He is one of the most famous artists in the UK after all....
He had a special ScaryGoRound mini comic and some limited prints, yet I bought the other ones.... Dave Roman took the photo!

Next I met Jenika, I met her at BICS and was happy to see her here too! She actually remembered me from the other con! :) 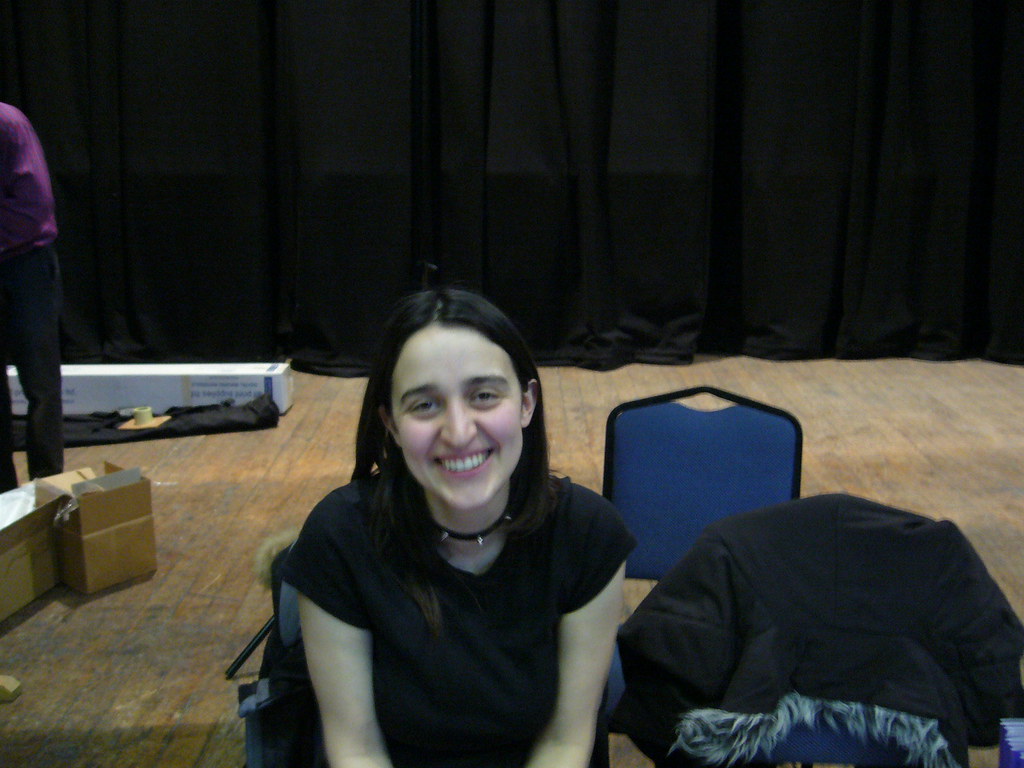 You should really check out her site! You won't regret it! :)
She also had a tombstone and gave me CANDY!!!!! XD 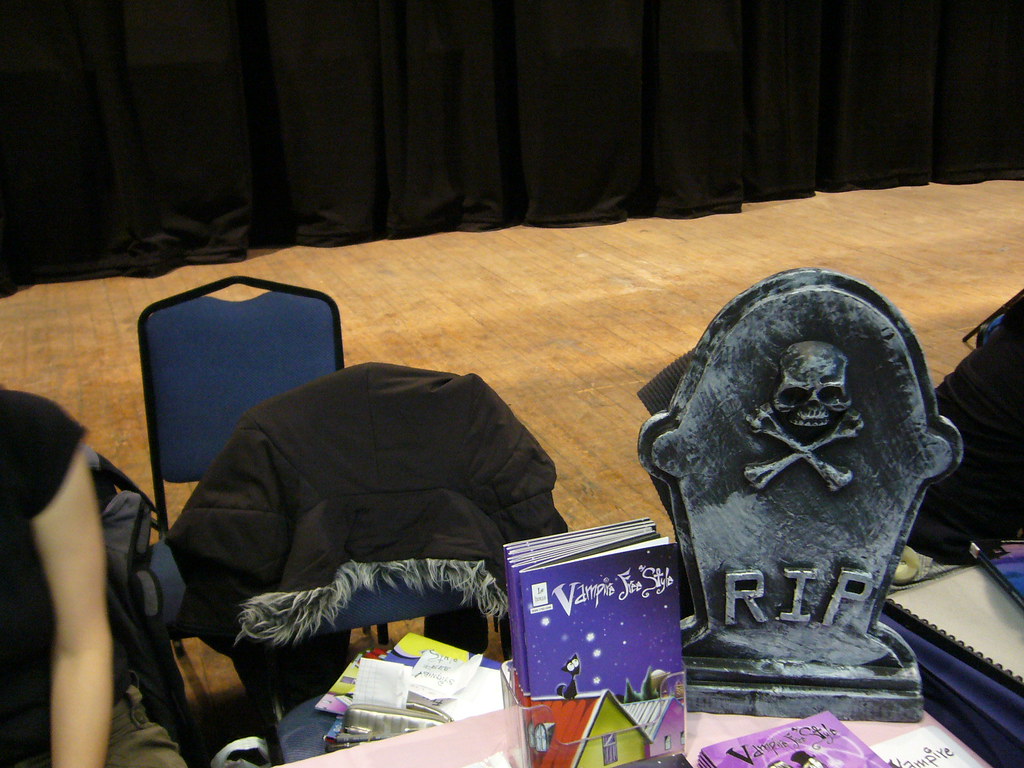 lizgreenfield
from Stuff Sucks! NOO! The photo is blurry! 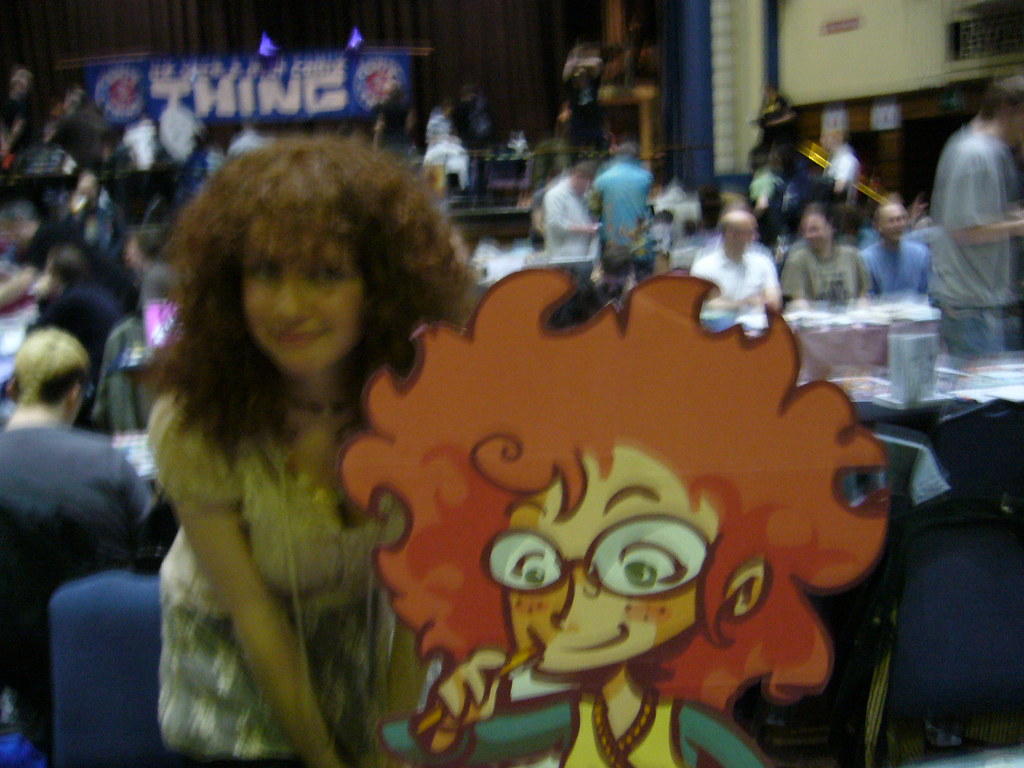 Liz  took a photo of me with Imogen!  YAY! 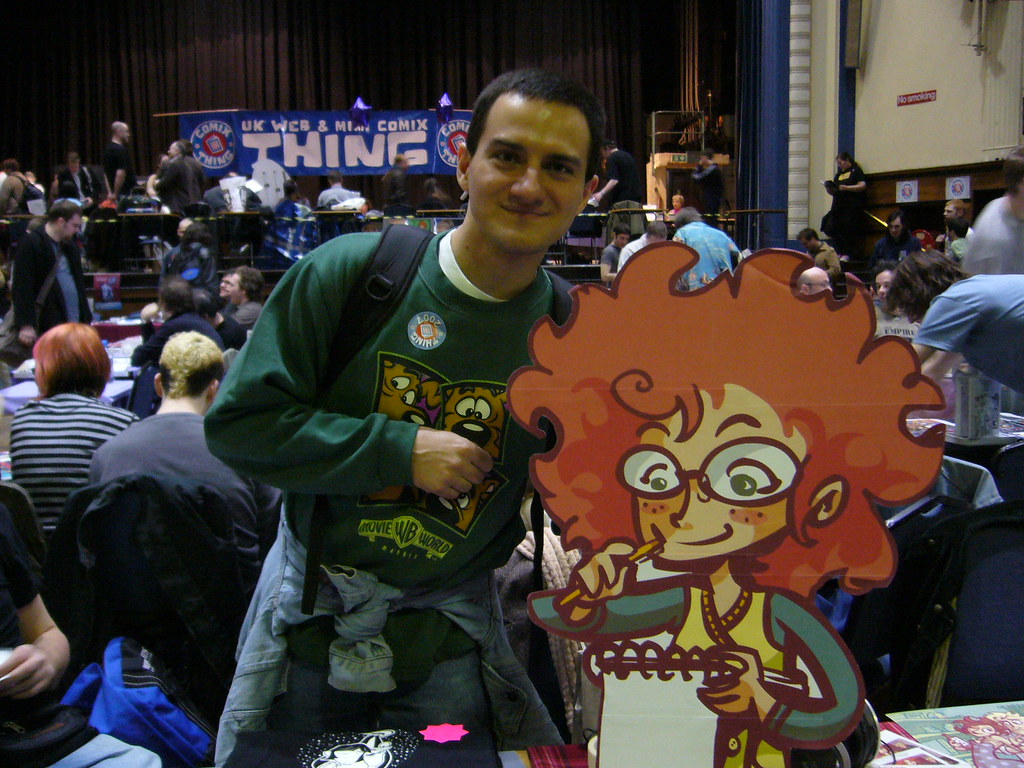 I took a photo of Ali, Liz and Imogen! The look on their face is that of "Let's hope he doesn't screw up the photo this time" Or maybe "DAMMIT! We weren't ready!"? :P 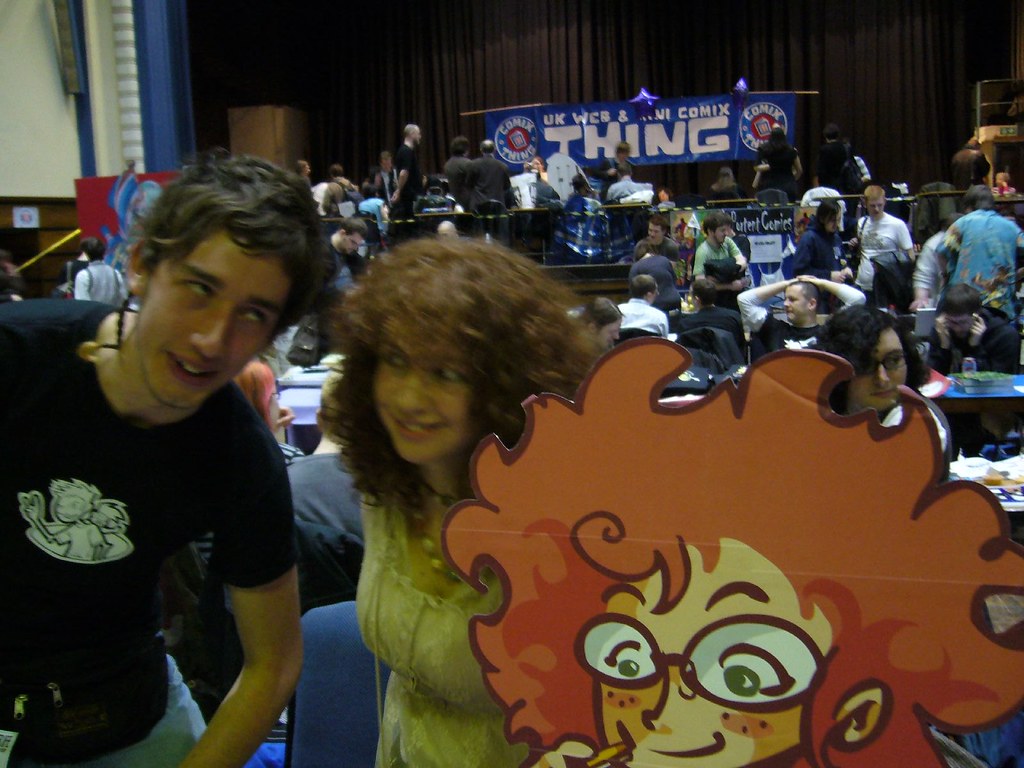 Another photo of Imogen, because SHE DESERVES IT! 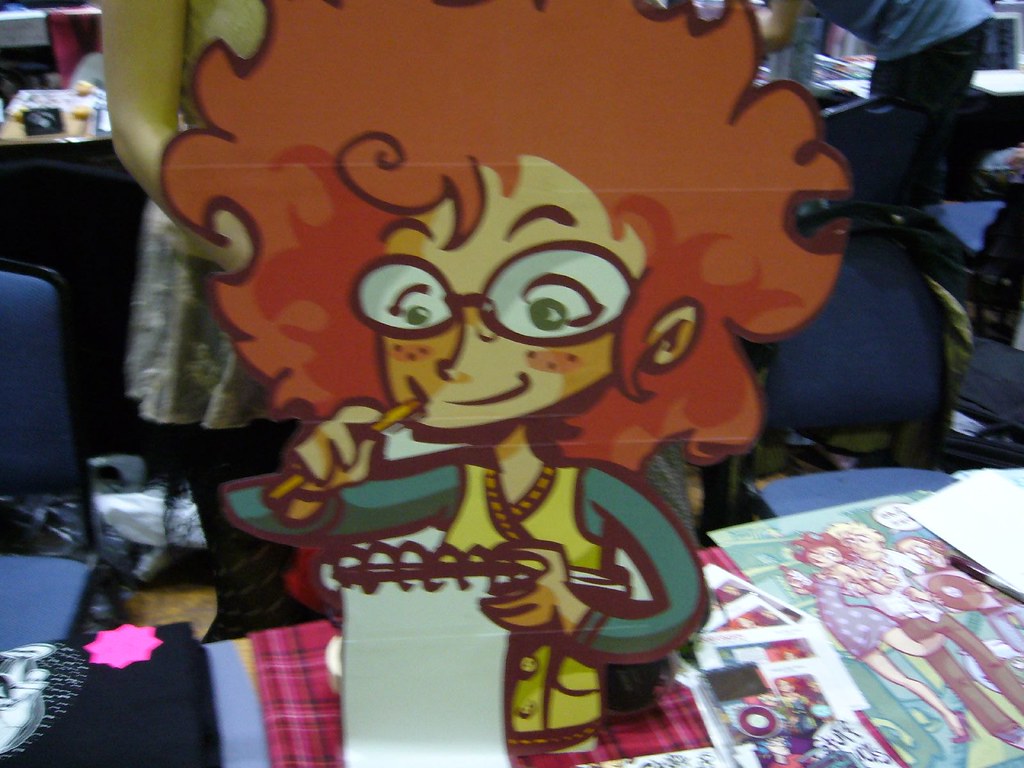 I bought a water of Imogen and the sketchbook and more SHIIINY buttons, which she got from the awesome POUSER INK! (Wink, wink, plug, plug). She also singed my Side A, which oddly enough, I got before her! :P

This is Chris Hasting of Dr. McNinja! 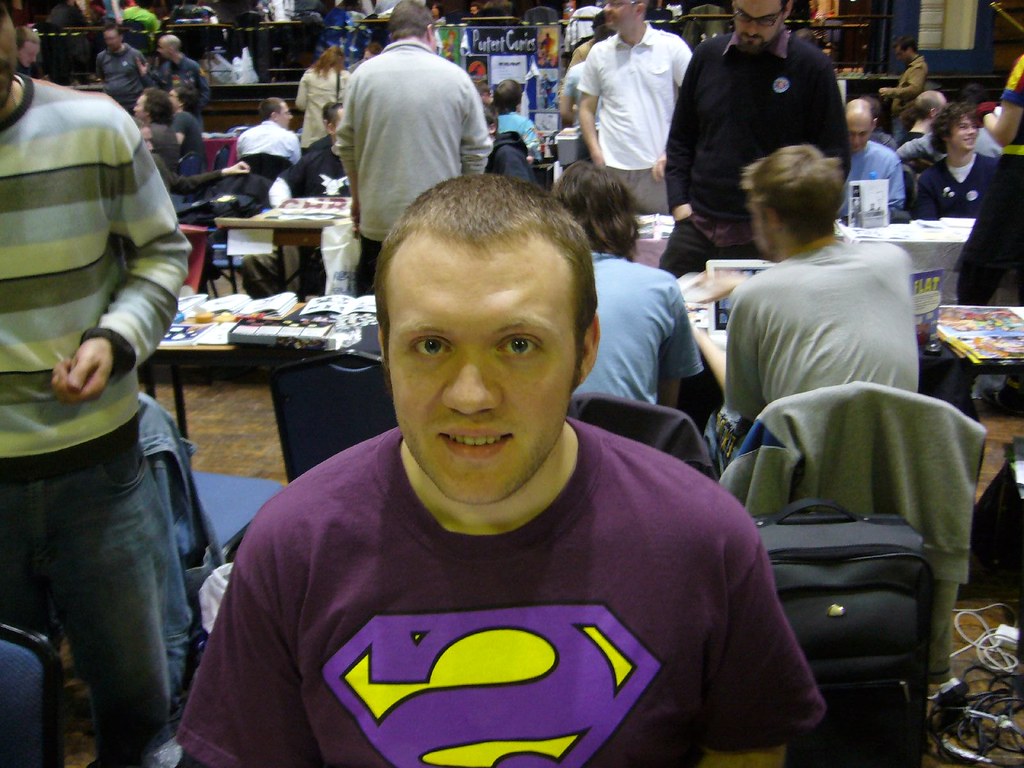 But wait... Where is CARLY? She didn't make it?

KHAAAAAAAAANNNN! Oh, well.... I got a Yoshi sketch from him!

This is Lem from Bunny! 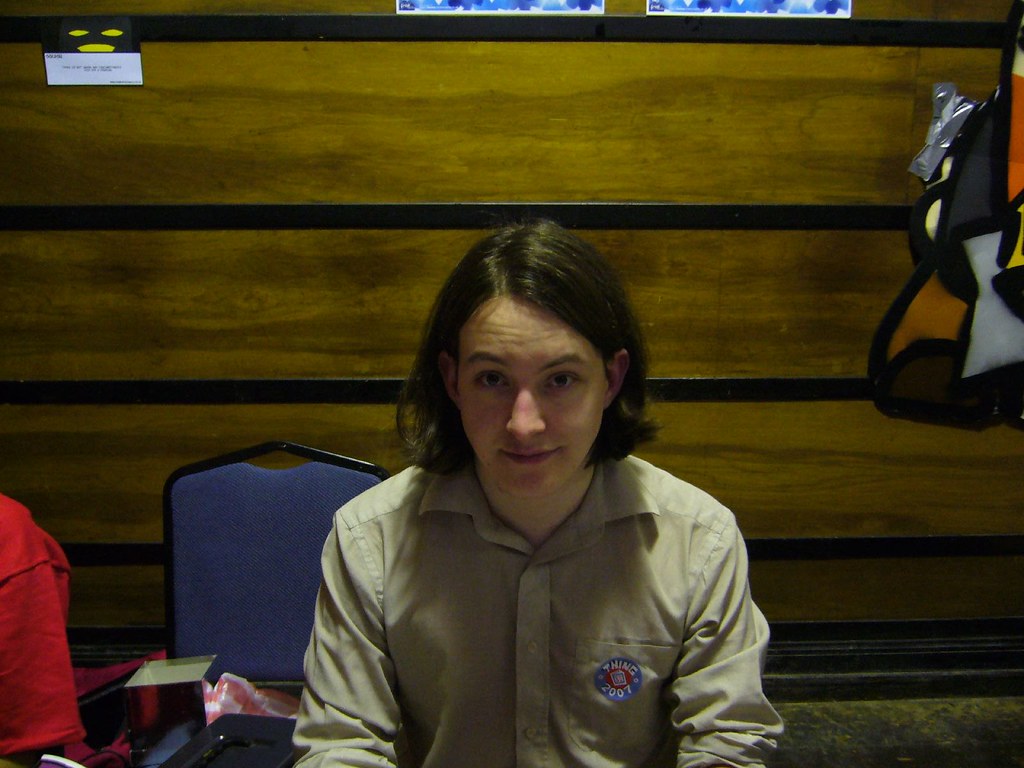 He had tiny clay-like bunnies! I got a blue one! :) 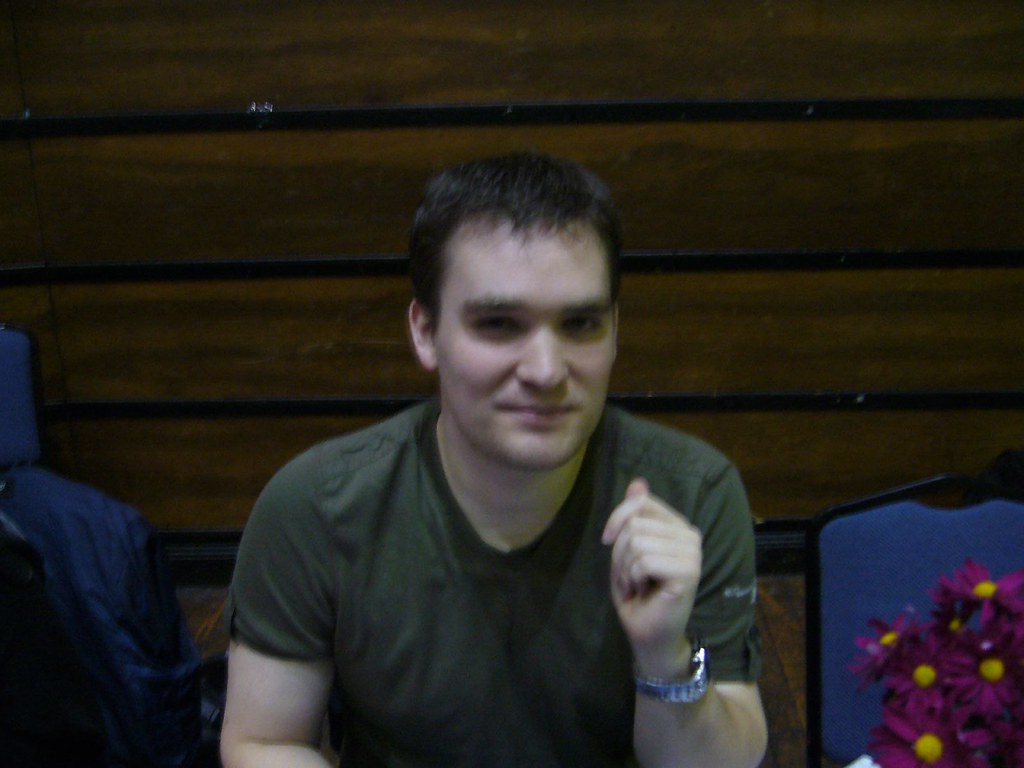 This was his first convention I think, but he did very well! :) 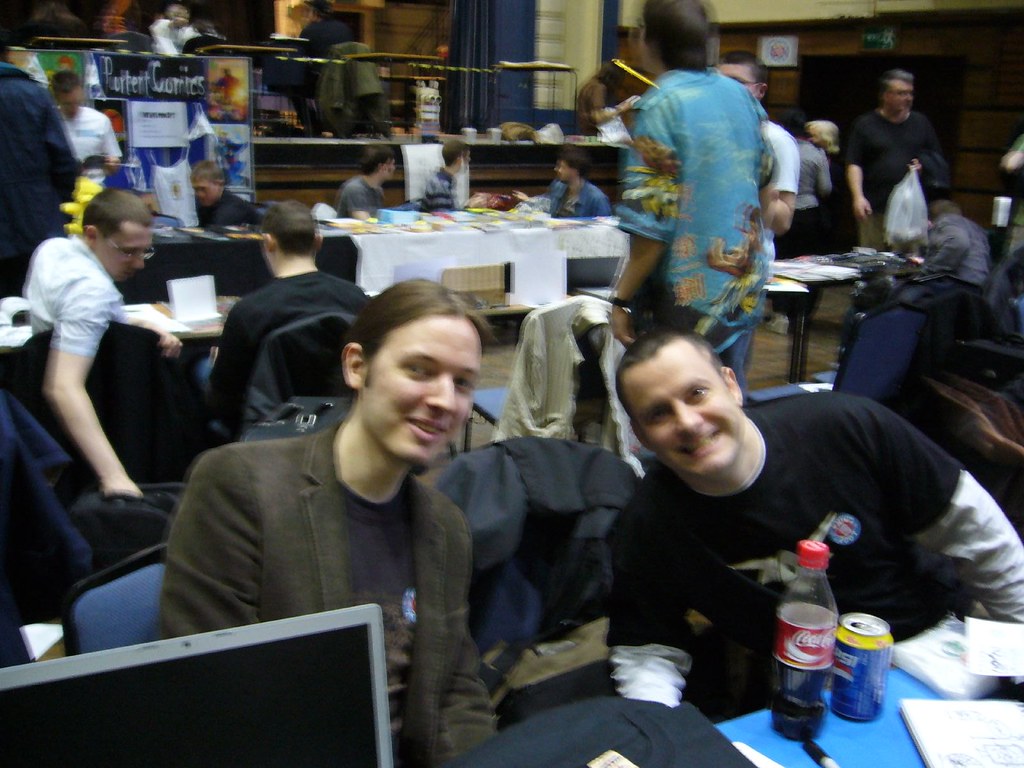 They had a SECRET deal! Buy a bunch of SHIIIINY things and get a sketch for 4 pounds! HOT PISS! XD 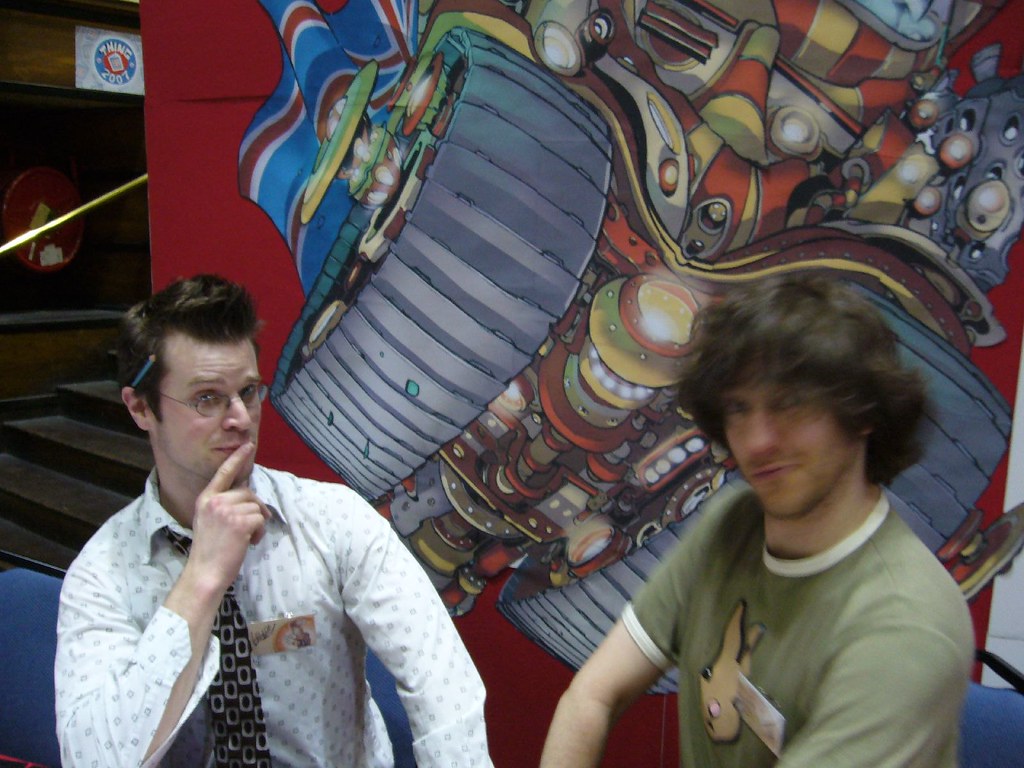 I met them at BICS and fell in love with Malcolm Magic! They didn't have any new Malcolm Magic, but they had other comics! YAY! Possibly the best comic in print in the UK! XD

I met a lot more people, most of them friends of the Webcomic Crossover and Cameo Archive. It was a bit of a blur after that...

After three hours, my backpack was full and my stomach was empty... I had to leave.... *sniff*

I said my goodbyes to Raina, Roman, Liz and left... I could have practically eaten for free there... Almost everybody offered candy and cookies, but I did buy from almost all of them... I think... Like I said, my mind was blur.... :P 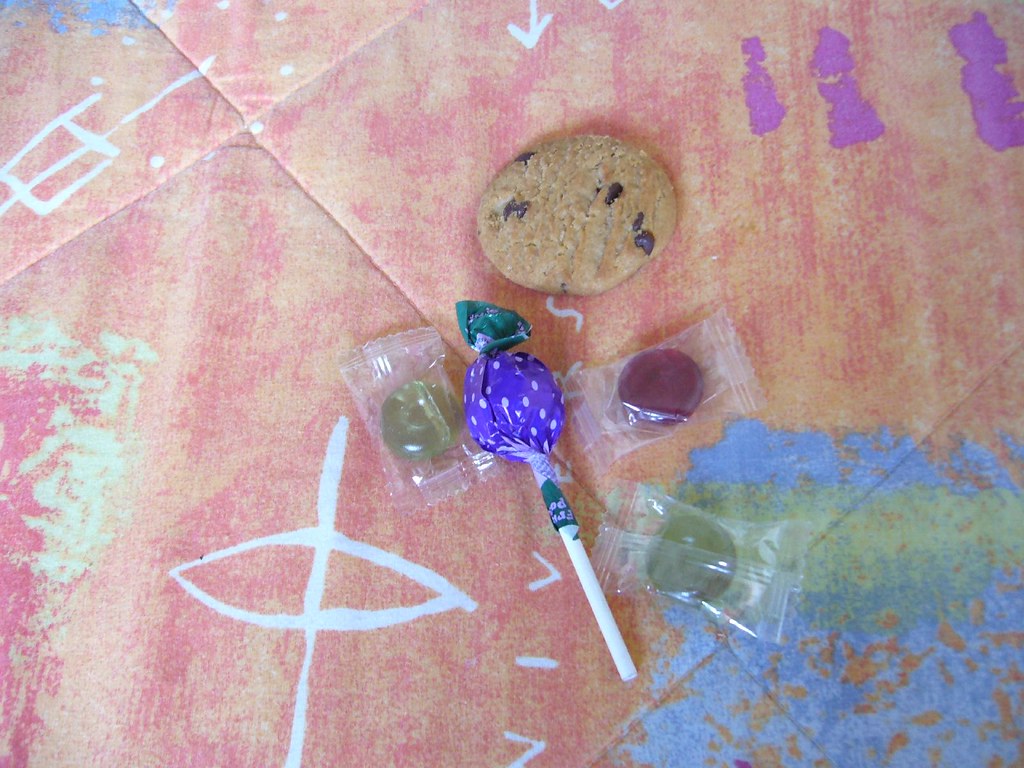 So... I went to Forbidden Planet, once again, it took way too much time to get there! It was almost closing time when I got there and I didn't dilly dally with lunch!

I got Owly books, Scooter Girl, Lenore, some Sonic comics and... A SONIC HAT! SEEEEEGAAAA!

Everything closes so early in the UK, so I got up early so I could shop for souvenirs at the airport.... The trip to the airport was as long as the plane ride.... Seriously, how bloody big is the UK? :P

When I got to the airport, I found out that you only have one suitcase on the plane and one carryon luggage.... Thank God... I didn't get too carried away.... Well... 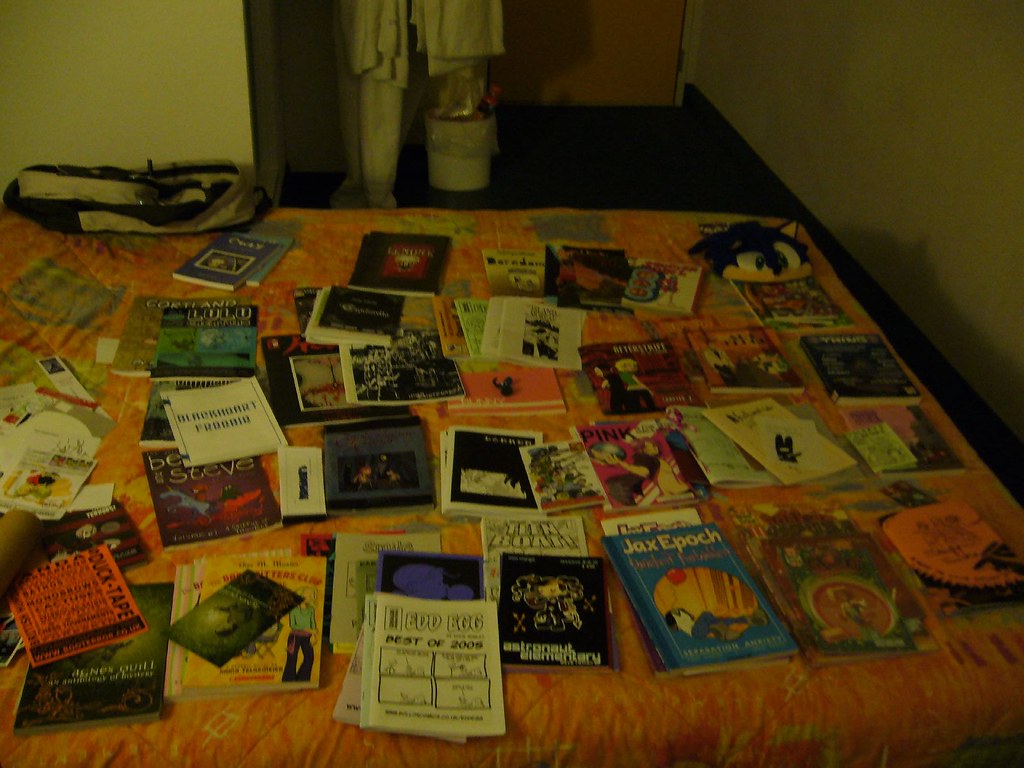 Oooh...Kay... Maybe I got a little carried away! But I couldn't help it! They gave me candy! AND THEY HAD SHINY THINGS! 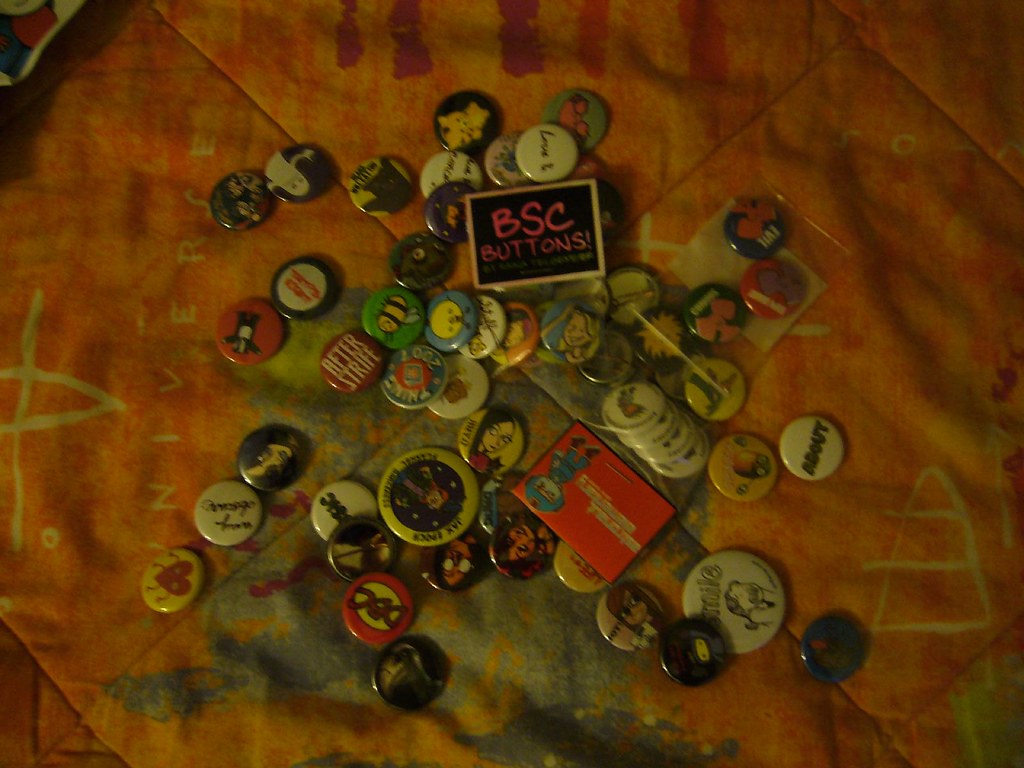 I also got sketchies galore! 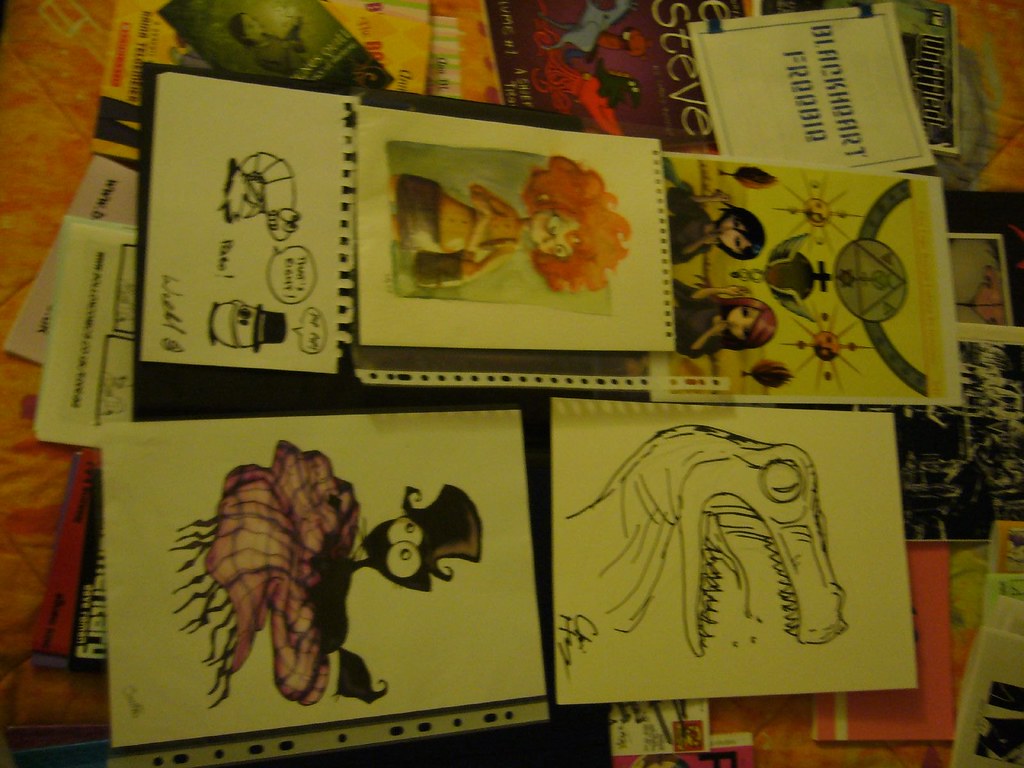 Where was I? Oh yeah... Shopping... Well, I bought chocolates and tea... and... the NEW PHEONIX WRIGHT FOR ME!! HOLD IT! OBJECTION!

And yet, I read comics all the flight... Mostly everthing I bought from Raina and Dave... THEY GAVE ME A SAMMICH ON THE PLANE!